The District of Columbia Hospital Association works to advance hospitals and health systems in the District by promoting policies and initiatives that strengthens our system of care. 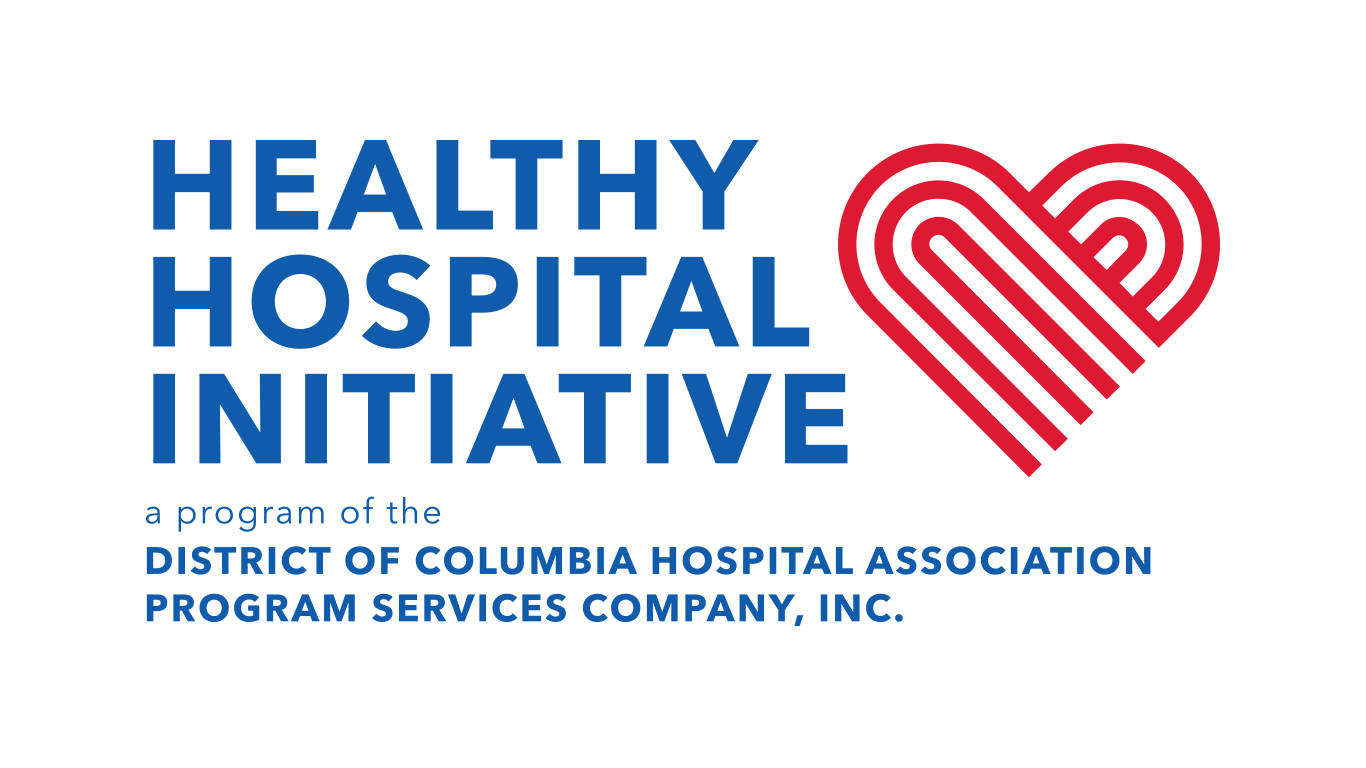 The 2022 Healthy Hospital Initiative Cooking Competition Awards were given to the following hospitals and individuals:

The chefs used the secret ingredient of blueberries to make their dishes unique, creative and delicious. Winners were presented with trophies and now have bragging rights on what hospital has the most delicious food. Congratulations! 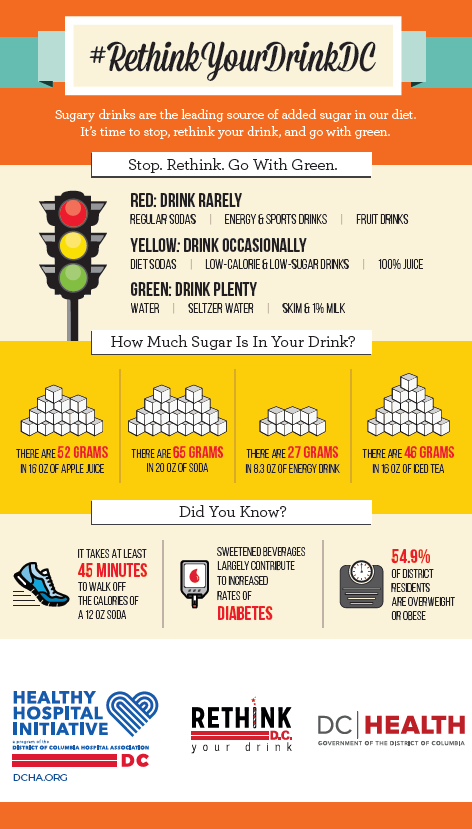 What is the Healthy Hospital Initiative?

The Healthy Hospital Initiative is a partnership between the DCHA Program Services Company, Inc. and DC Health to reduce the availability and consumption of sugar sweetened beverages, and to promote healthier choices in district hospitals.

Why are we making these changes?

More than half of District residents are overweight or obese, and diabetes is the sixth leading cause of death. Research shows that decreasing sugar-sweetened beverage consumption can lead to lower rates of chronic disease and obesity. In order to continue the mission of our District hospitals to promote health and healing we will increase and promote our healthy beverage offerings to make the healthy choice the easy choice for our patients, staff, and community.

How is wellness defined?

There is no consensus around a single definition of wellness, but there is general agreement that at minimum, wellness includes the presence of positive emotions and moods (e.g., contentment, happiness), the absence of negative emotions (e.g., depression, anxiety), satisfaction with life, fulfillment and positive functioning. In simple terms, wellness can be described as judging life positively and feeling good.

Why is wellness important?

Health is more than the absence of disease; it is a resource that allows people to realize their aspirations, satisfy their needs and to cope with the environment in order to live a long, productive, and fruitful life. Wellness integrates mental health (mind) and physical health (body) resulting in more holistic approaches to disease prevention and health promotion.

What role does wellness play in overall health?

Wellness is associated with numerous health, job, family, and economic-related benefits. For example, higher levels of wellness are associated with decreased risk of disease, illness, and injury; better immune functioning; speedier recovery; and increased longevity. Individuals with high levels of wellness are more productive at work and are more likely to contribute to their communities.

How is wellness measured?

Because wellness is subjective, it is typically measured with self-reports.  One way to measure your own wellness is by using the CDC Healthy Days Measure. You can take the test several times a year and compare your score each time. While everyone will have a different number, generally, the lower the number, the better.

What is a sugar sweetened beverage?

Any beverage in which sugar has been added such as soda, juice drinks, sports drinks, flavored milks, and energy drinks. These beverages often have no nutritional value.

What if I still want a regular soda or other sugar-sweetened beverage?

Sugar-sweetened beverages are still available; however our dining venue wants to promote healthier options. Employees, patients, and families are still permitted to bring their own beverages into the hospital.

What is the best beverage for me to drink?

Water is always the best option. Water makes up about 60% of your body weight, and your body depends on it to survive. The amount that you should consume varies by person, climate, and activity level, however the Institute of Medicine suggest at least 15 cups of water a day for men, and 11 cups for women. Note that these recommendations include water from food.

Diet beverages are generally sweetened with sugar substitutes and provide no added calories. Artificial sweeteners are regulated by the FDA, and they are deemed safe. With this initiative, our main objective is to reduce obesity and diabetes rates. The link between sugar-sweetened beverages and chronic disease is clear, and evidence shows decreasing intake of added calories from sugar-sweetened beverages can lead to better health outcomes.

I need caffeine! What are the alternatives?

Many alternative caffeine options exist without the extra calories from added sugar: 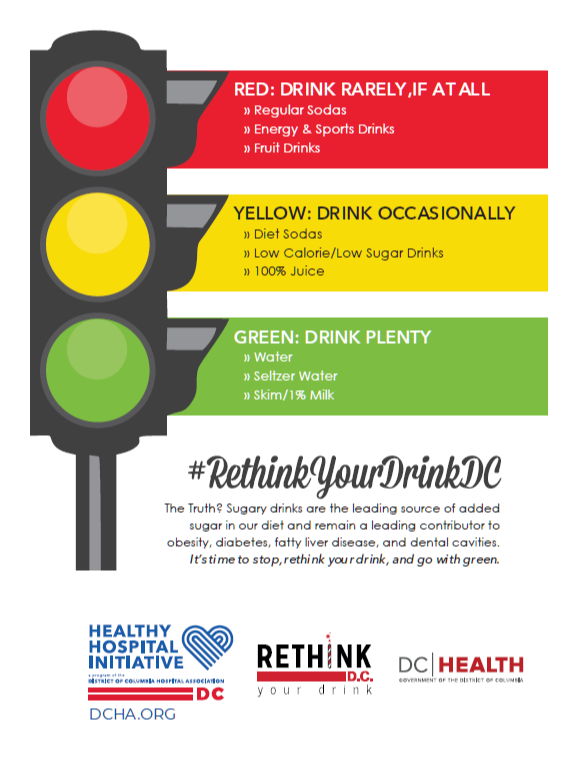 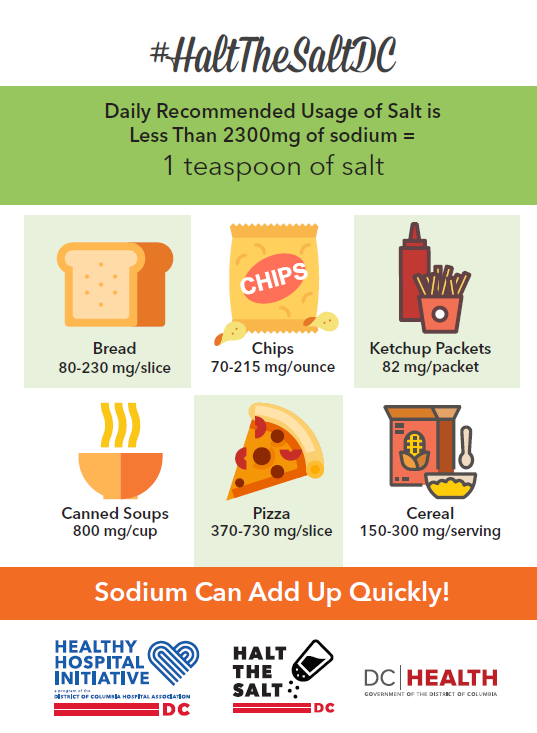 Why should I limit sodium?

How much sodium do I need?

Most people eat too much sodium, often without knowing it. The average American eats about 3,400 mg of sodium a day. The American Heart Association recommends no more than 2,300 milligrams (mgs) a day and an ideal limit of less than 1,500 mg per day for most adults, especially for those with high blood pressure. Even cutting back by 1,000 mg a day can improve blood pressure and heart health.

What are sources of sodium?

Most of the sodium in our diets comes from adding it when food is being prepared. Pay attention to food labels because they tell how much sodium is in food products. For example: foods with 140 mg or less sodium per serving are considered low in sodium. Here is a list of sodium-containing compounds to limit in your diet:

What foods should I limit?

The best way to reduce sodium is to avoid prepackaged, processed, and prepared foods, which tend to be high in sodium. Watch out for the “Salty 6” — the top six common foods that add the most salt to your diet. Read food labels and chose the lowest level of sodium you can find for these items: breads and rolls, cold cuts and cured meats, pizza, poultry, soup, and sandwiches.

How can I cook with less salt and more flavor?

What about dining out?

Controlling your sodium intake does not mean spoiling the pleasure of eating out. But order carefully. Consider these tips for meals away from home: 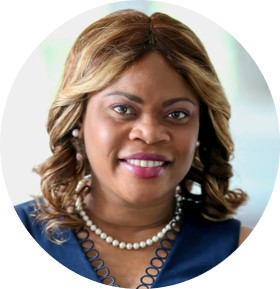 Yolette Gray is responsible for providing leadership, support and execution in public policy development, research, community engagement, government relations and grassroots advocacy. She also provides assistance and leadership in the Association’s strategic planning and policy development process with emphasis on the anticipated impact of external issues and their impact on hospital and associate members. 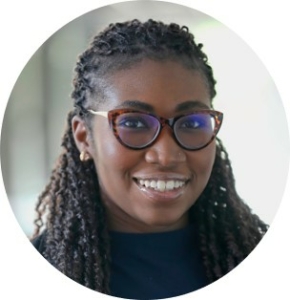 Bolu is responsible for providing administrative, research and coordinative support for the DCHA team. Bolu assists with meetings, events, publications and special projects.